U9s Lose to Swardeston by 18 Runs

Despite excellent performances from Charlie Green, Lohit Kannan and Cameron Graveling, Great Melton U9s lost their opening game of the season by 18 runs to Swardeston.  Batting first, Melton made 251 for 8, Charlie Green top scoring with 5 not out. Ethan Rushton and Isaac Boyce showed great determination in their batting.

For much of Swardeston's reply the outcome of the match was in the balance. Cameron Graveling, Lohit Kannan, Ben Fletcher and Charlie Green bowled with pace and accuracy taking a wicket each. When the run rate needed to be controlled Ben Johnson bowled a maiden over which included two excellent run outs by Charlie Green and Cameron Graveling who hit the stumps with direct throws from some distance. Nat Buxton was superb behind the stumps. In the end Swardeston made just 8 more runs then Melton and lost 6 wickets to Melton's 8, their final score being 259 for 6.

On a day when 4 players played their first competitive game, this was a great performance. 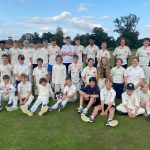