U11’s edge out Old Bucks in last over thriller

Manager James Robb took the opportunity to select eight different players in this South Norfolk Community league fixture against Old Buckenham at Melton Park on a splendid morning for cricket.

Winning the toss captain Sam Davey opted to bat first and Melton posted a challenging score of 100-4 in there 16 overs. Harrison Cunningham top scored with an impressive 27 only to be run out in the 16th over, he was well supported by Davey (4) Peter Thomas (4) Krishna Patel (10) and Callum Fletcher not out 5. Excellent fielding from the Old Bucks team ensured the Melton score was restricted to 100.

After much consumption of mid game energy food (chocolate biscuits!) Melton took the field and bowled tightly with William Bailey and Adithya Velu proving hard to get away. However the game turned on its head in the 11th and 12th overs with 25 runs plundered by the Old Bucks batsmen leaving 24 runs from 4 overs needed for victory. However 2 wickets for Davey and 1 for Cunningham put the pressure on the batsmen as the final over commenced with 7 needed for victory. Bowled by Cunningham the first ball went to the fence, the second was a wide, the third a LBW wicket leaving Old Bucks on 99-5. Two further wickets (both run outs with fine wicket keeping by Ethan Ellis) sealed the win for Melton in an excellent and exciting match.

Well played to both teams.

Sent from my iPad 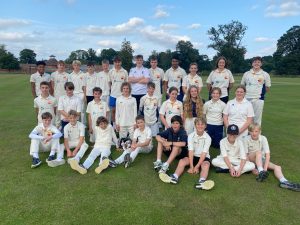 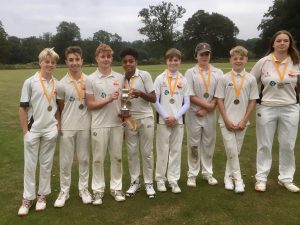 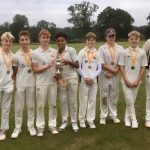 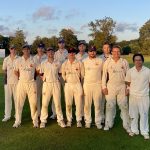