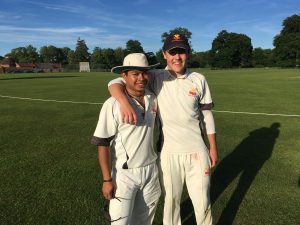 Make hay while the sun shines, so the saying goes. While the sun shone at Melton Park on Saturday, Sam Mann & Joey Greenslade made considerable hay, both making centuries and setting a new club record partnership for any wicket in the process.

Despite a heavy lunchtime shower, it looked for all the world a good day for batting; the pitch, straw-coloured and in the centre of the square, appeared flat and full of runs. Melton, surprised at being invited to bat, suffered an early set back, losing Loines for 5 with the score on only 20. It would be the last wicket to fall for some time.

For the next couple of hours, Joey Greenslade (107*) and Sam Mann (146) put the Mattishall bowlers to the sword, their contrasting styles complementing one another perfectly. Mann the aggressor, drove, pulled & cut the ball to the fences whereas Greenslade, recognising his partner’s dominance, stroked the ball into the gaps with skill and maturity, content to rotate the strike and play the more supporting role.

Mann rode his luck a little, but by the time he was out in the 42nd over, the partnership had reached 249, just surpassing the previous record of 244 which had stood for 24 long summers. Greenslade made sure of his own century and remained not out at the close.

In reply, Mattishall made a decent fist of a difficult run chase. They kept up with the required rate for a long time but were ultimately undone by the necessity to keep on scoring. Melton kept things as tight as they could & kept chipping away until the away side ran out of capable batsmen & the rate got too high.

Joe Bickel (9-1-35-2) bowled his best spell of the season and played the largest part in wresting control away from the visitors, David Bunn picked up 2 wickets and one a piece for Mawby & Henderson. Melton fielded well, held their catches, picked up a run out and even had the confidence to allow the Mann of the moment to bowl 4 overs at the death.

For this author, as one of those involved in the previous record stand, it was a bitter-sweet day. On one hand, disappointing to see the last vestiges of a long-forgotten top-order batting career disappear over the horizon, whist on the other a joy to be there to witness two talented and highly likeable team mates go about their work with such great skill, concentration & stamina.

For Melton A, this is shaping up to be a good season after 2 lean years. The 4 successive wins picked up so far this season equals the total achieved over the previous two years combined. Long may it continue.