Great Melton U9s (301-0) beat Sprowston (268-5) by 53 runs at Barker’s Lane in the John Dewing u9 Trophy
So often junior cricket matches can be decided on the strength of one or two strong individual players, but this was not the case for the U9s last Sunday where a fantastic all round team performance saw them defeat Sprowston.
Bowling first, the U9s were excellent in the field, and all the bowlers showed great control and accuracy to limit the number of extras the opposition were awarded. Ned Francis (2-0-4-2), George Alcock (3-0-8-1) and Danny Wright (3-0-8-1) were the wicket takers for Melton. Rupert Beasley showed great control when asked to close out the innings and bowl the final over.
Owen Ward on debut as a wicketkeeper was superb behind the stumps, and showed great technique and courage to stop everything that came his way. Robbie Woods was another who excelled in the field, showing a great long barrier on many occasions, and great awareness on one occasion to back up and save what looked like a certain 4 over throws. It was testament to the strength of the bowling, that skipper Alcock had to think hard before deciding who to give the extra bowling overs to.
Melton were asked to chase a net score of 248, and all batters excelled, with NO Melton batsman getting out. Jack Joice batted with confidence to hit 3 lovely boundaries and finish with a commanding 17 runs. He was ably supported by Archie McKay, and the two of them put on 31 for the 2nd pair. George and Owen put on 34 for the final pair with some sweetly hit boundaries of their own.
All the batting pairs called confidently, and took plenty of singles. This enabled Melton to finish on 301-0.
It was very satisfying to see that many of the skills we have been working on at training such as fielding, accurate bowling and calling when batting are being applied by the team. An excellent team performance.
For full Play-cricket scorecard click this link: http://greatmelton.play-cricket.com/website/results/3602893 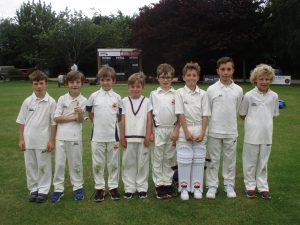