Star batsman Richard Wood took the 1st Team Player of the Year Trophy for the 5th consecutive season at Great Melton Cricket Club’s Presentation Dinner at Glen Lodge, Bawburgh. Although the wet summer made it more of a bowler-friendly season, ‘Woody’ still scored 614 runs at an average of 61.4 and, in his 5 seasons with the club, has plundered a phenomenal 3965 runs at an average of 56. The A Team award went to skipper Lee Whiddett who scored 334 runs and took 18 wickets in leading his side to 3rd place in Alliance Division 4 following their promotion the previous season. The B team trophy went to Eusha Fawad, the C Team award was won by Steve Clarke and the Sunday Player-of-the-Year was Martyn Cook who also took the club’s newest trophy, ‘Bubble’s Boundary Challenge Shield’ by hitting 98 fours and 16 sixes! Leading youngster was 15-year-old County player and 1st team regular , Chris Greenslade who , scored 678 runs and took 23 wickets. He was voted U17 Player of the Year but Michael Farmer ran him close and took the Keith Hall Trophy for the Most Improved Player.

Chairman Steve Phoenix thanked Melton’s large band of volunteers for their hard work and congratulated the teams on a successful season. Although only the Sunday side, who finished runners-up in the Mid-Norfolk Sunday League Boyle Division 1, had anything to show for their efforts, the 1st team finished 5th and the other 3 Saturday teams 3rd which, considering all 4 teams were competing in higher divisions, represented excellent progress. The club had completed 136 out of a possible 157 matches with the Juniors winning 3 competitions and finishing runner-up in one while Melton were chosen as Norfolk’s OSCA (Outstanding Service to Cricket Award) winners for their Cricketforce efforts.

Clubman of the Year once again was groundsman Mike Phoenix who had to work harder than ever as threat of drought and hosepipe bans gave way to the wettest summer for many years. The two Aldous Special Awards, named after former President Eddie Aldous who sadly died during the year, went to Jason Whiddett and Richard Wood for a record 3rd wicket partnership of 233 and Duncan Greenslade who, with wife Maria, plays a major role in the success of the junior section.

Leo DeSalis received a pecial inscribed tankard to mark his 400 appearances and his efforts in overhauling Alan Ely’s longstanding record to become the club’s leading wicket-taker with 583 victims. Michael Farmer was another who broke a record that had stood for many years, his 22 catches were the most ever for a non-wicketkeeper. Appearance awards went to Chris Greenslade, Michael Farmer, Paul Stearman (100 appearances), George Bunn (200 appearances), Alex Cooper, Marcus Godbold and Lee Whiddett (300 appearances).

With several of the team captains, including 1st Team skipper Mark Scott, standing down and several other positions to fill the club are hopeful of a good turn-out at the A.G.M. on Wednesday 4th December in the Pavilion (7.30 p.m.) but, until then, cricket life goes on with Winter coaching for some of the club’s juniors already well under way at Hethersett High School on Tuesday evenings. 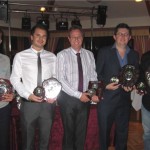 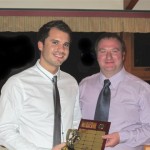 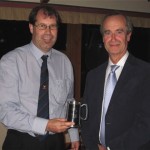 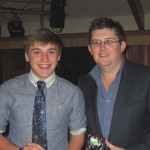 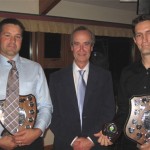 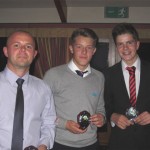