The final Saturday of the season produced the worst availability of the summer at Great Melton.  With 14 of the First Team ‘squad’ unable to play for various reasons, the knock-on effect was felt by the other three teams.  Amazingly the captains, helped by C Team manager Duncan Greenslade’s powers of persuasion, the  first use of the Norfolk Cricket League’s loan system and the fact that both the 1sts and the Cs went with 10 players, meant that the club was able to fulfil all 4 fixtures.  Even more amazingly, three of the teams won!The much-weakened Firsts, containing only 2 players who played the previous week, ended a rather dismal season with a 123-run defeat at Saham Toney who will go down with Melton despite Saturday’s result.  Saham Toney  scored 251-7 with A.Mower hitting 65 and M.Hunter 63 and Melton were bowled out for 148 in reply despite a half-century from Sam Mann.  Relegation back to Alliance Division 3 after just one season will at least give the side a chance to rebuild but there is no doubt it has been a disappointing campaign.  A more settled side will surely be the aim in 2019.

The A Team confirmed their third place finish behind Cromer A and Denver in Division 5, winning by 104 runs against 9-man Lowestoft A. The Whiddett brothers Jason and Lee scored 67 and 66 respectively with Matt Henderson chipping in with 20 as Melton totalled 257-5 at Melton Park.  Kyle Mason then conceded only 10 runs in his 9-over opening spell and Kyle Weston just 17 in his 7 overs as Lowestoft made little effort to chase down Melton’s score.  Eventually they lost six wickets scoring 153 with Caitlin Ellis (8-0-41-1) picking up a wicket on her A Team debut, Matt Henderson (7-0-28-2) taking two and Dale Weston, out injured all season, making a slightly premature comeback with figures of 6-0-20-2.

The B Team included 5 players: Steve Phoenix, Steve Clarke, Ben Johnson, Clive Gristwood and Ollie Leinster, promoted from the Cs and Ollie’s dad Stephen giving up his seat at Carrow Road to help out at East Harling but they also had Aslam Mohammed!  Aslam scored 71 and took 3-13 as the Bs banished any lingering relegation fears with a 70-run victory.  Skipper Matt Rushton scored 31, Clive Gristwood (11) helped Aslam add 60 for the fifth wicket and Steve Phoenix (20 not out) and Anush Ganesh (15 not out) scampered some valuable runs in the final few overs as Melton made 190-7.  Aslam, Kevin Ellis (2-33), Rushton (2-7) and debutant Ganesh (2-42) helped by two excellent catches by Gristwood and one by Ben Johnson, then dismissed Harling for 120.  Leg spinner Ganesh, a UEA student, was very impressive on his debut and the hospitality of East Harling was first class as usual.

Duncan Greenslade did brilliantly to cobble together some sort of C Team for the visit of Hethersett & Tas Valley C.  Simon & Ben Carding made a welcome return on loan as Colney didn’t have a game and both made big contributions, Ben scoring 32 and keeping wicket and Simon hitting 31 and taking a wicket for just 5 runs in 10 miserly overs.  Clive Rennie also enjoyed himself, opening the batting and scoring his first-ever 50 in Melton’s total of 189-6.  Duncan Greenslade chipped in with 25 and Sam Nutt and Kit Fordham both scored 10 on their first senior appearance of the season.  Alice Greenslade (6-0-36-3) then took three early wickets before Ben Way’s 52 and Alex Girdlestone’s 40 kept the visitors well in the game.  With Girldlestone and Josh Hayes (12) both run out and Duncan Greenslade taking 2-51 from his 10 overs Tas just fell short – by 8 runs – despite Will Worley’s unbeaten 25.

On Sunday Melton Park hosted the NCB U19 T20 Finals Day but, sadly, the forecasted rain daily arrived – a little earlier than expected – meaning the final between Swardeston Sharks and Barton Spartans had to be postponed.  The two semi-finals, however, were played with Brooke and Fakenham the losers.  The Final will now be played on Sunday 9th September at Barton Turf. 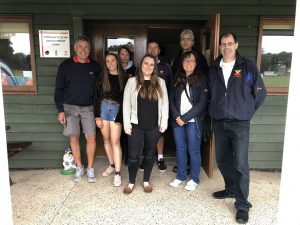