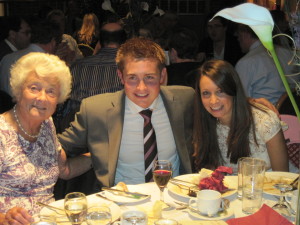 Audrey at the 2009 Dinner with grandchildren Olly & Lucy.

It Is with much sadness that I must report that my lovely mum-in-law and long serving Vice President, Audrey Holland, passed away peacefully today in the Norfolk & Norwich Hospital, aged 92.  Audrey was a big supporter of the club and was often seen, accompanied by her little dog, Jaz, my mum and Celia, at Melton Park or Town Close.  She also attended many of our club dinners including the 2014 one at Dunstan Hall.

Fiercely proud of her family, including her 9 grandchildren & 7 (and a bump!) great-grandchildren,  Audrey was one of the trendiest 90-somethings I’ve ever known with her bright clothes and cheerful personality.  Mobile phones were no problem to Audrey and, until she was hospitalised for a time just after Christmas, she was still driving her car and doing voluntary work for the Cheshire Home.  Her incredible 52 years’ service was rewarded last year when she was presented to the Queen  at St. James Palace.

Audrey lived on Swardeston Common, at about square leg, and was almost as well known at Swardeston C.C. as she was at Melton.  She was quite simply a wonderful mum, mother-in-law, Grandma, Great-Grandma and friend.  She led a long and fulfilling life and will be sadly missed by a lot of people.  R.I.P. Audrey!