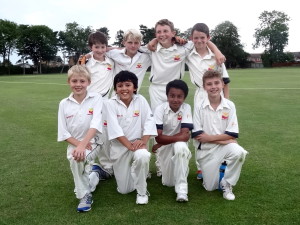 A devastating burst of 3 wickets in four balls by James Bridges and 5 wickets in 6 balls by the team, destroyed Fakenham’s promising reply to Melton’s net score of 296.  They never recovered sufficiently as Melton U11s moved confidently into the semi-final of the Terry Moore Trophy, winning by 54 runs.  Fakenham had started brightly with Hector Cargill and Louis Bragg scoring 23 without loss off Lohit Kannan and Bridges’ opening 3 overs but, with the 2nd ball of his 2nd over Bridges bowled Bragg.  He then had Cargill caught behind by Saxon Earley off a full toss 2 balls later and had Bragg caught by Jack Gorman at mid-on with his next delivery.  The hat-trick ball, the last of the over, saw Bragg brilliantly run out by Charlie Green and, amazingly, with the first ball of the next over, Mark Attfield had Reuben Laws caught behind. From 23-0, Fakenham were suddenly 23-5!  To their credit, they recovered enough to only lose one more wicket as Tom King (16) – run  out by a direct hit from Lohit – Ben Lucas (8 not out), Kyle Williamson (11 not out) and Liam Wall (6 not out) found the boundary several times but Fakenham closed on 278-6, a net score of 242, 54 runs short of Melton.  Bridges finished with excellent figures of 3-1-8-1 and Attfield 3-0-5-1 but Sam Johnson also bowled well, conceding just 2 runs in 2 overs of left-arm spin.

Earlier, having been asked to bat, Charlie Green (11 not out) and Ollie Leinster (7) gave Melton a good start with 31-1 off the first 4 overs. Second pair Bridges (3) and Kannan (12) were both out once but took the score to 257-3.  Johnson (10) and Attfield (13) were again dismissed once each but both scored enough runs to put Melton in a good position at 289-5 when last pair Earley and Gorman came to the wicket.  With Fakenham having already given Melton several extra runs with byes and overthrows, Melton’s last two batsmen exploited this, scampering several quick ones and twos as well as hitting a number of boundaries.  Saxon, in his usual fashion, scored a bullish 19 and Jack 9 as they added 37 without loss giving Melton 326-5, a match-winning total of 296.

The U11s unbeaten record will, no doubt be tested in the semi-final when they will meet either Vauxhall Mallards or Bungay at Melton Park.

The picture shows the U11s celebrating their victory!